On the third day of Christmas, my Netflix gave to me… something that it has never done before: it released “viewing figures” for a Netflix Original. On December 28th, Netflix announced on Twitter that 45,037,125 of their account holders watched Bird Box in its first 7 days of release. This is a staggering number when you consider that as of Q3 2018 Netflix had 137.1 million worldwide subscribers, meaning that 1/3 of all subscribers watched Bird Box in its first week.

Took off my blindfold this morning to discover that 45,037,125 Netflix accounts have already watched Bird Box — best first 7 days ever for a Netflix film! pic.twitter.com/uorU3cSzHR

Clearly a comparison to movie ticket sales is unfair as someone streaming a movie does not equate to someone willing to fork out $9.50 (approximate worldwide average ticket price), but it’s still interesting to note that this would represent a first week box office total of $427.8 million, which would put it $30 million higher than the all-time domestic opening week, held by Star Wars: The Force Awakens. This is an extraordinary success, especially when considering that anywhere up to an estimated 35% of users share their streaming passwords, and that more than one person could be sitting down watching the film, and it all adds up to some mind-blowing numbers.

While some may claim these account figures are dubiously high, the ratings company Nielsen has just backed up these claims, stating that Bird Box had an unduplicated audience of 26 million viewers in its first week (Nielsen measures USA viewing figures only, and with 58 million domestic subscribers, these figures easily match up with the 1/3 of all account holders claim). On its opening day, Nielsen calculated that Bird Box had 3.5 million viewers, which is actually considerably lower than last year’s Will Smith-driven, Bright which managed 5.4 million viewers, but then tapered off only hitting 20 million by the end of its first week. 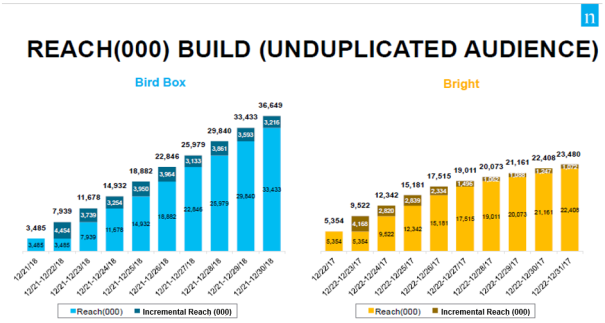 In fact, Bird Box was consistently watched by close to 4 million viewers every day for the first 10 days, whereas Bright rapidly declined in viewing figures, down to a little over a million on day 10. This comparison gives us an insight into how Bird Box might have pulled this off, so let’s examine what it takes to create such a success.

What did Bird Box have that Bright did not? They both had considerable star power with Sandra Bullock driving the Bird Box machine, and Will Smith leading the way with Bright. 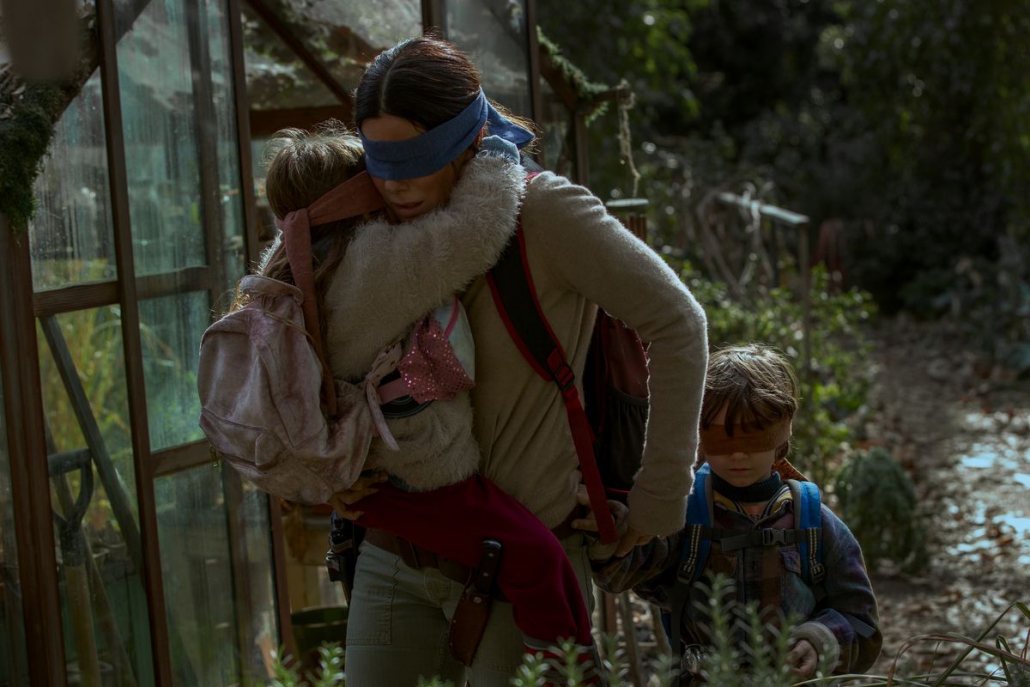 While star power doesn’t hurt a film, it is by no means essential – take another Netflix hit sensation, Stranger Things, to demonstrate that – very little star power, but huge viewership (according to Nielsen, Stranger Things season 2 is the only Netflix Original with a higher unduplicated audience than Bird Box). Star power certainly didn’t hurt either film in drawing viewers to watch on day 1, but does not explain fully why Bird Box succeeded.

Bright, directed by David Ayer (Suicide Squad, Fury) was not well received by critics, managing just 25% positive reviews on Rotten Tomatoes, although viewers seemed to not be so harsh, evidenced by its 6.3/10 average score on IMDb.com.

While Susanne Bier’s Bird Box was certainly more warmly received by critics (63% on Rotten Tomatoes), it only slightly out-paced Bright in terms of the general public (6.7/10 on IMDb). Decent ratings from critics and word of mouth certainly helped Bird Box, but again does not really crack the surface of this smash hit.

Imagery – That Blindfold And Beyond

The seed that seemed to spawn the viral hit that is Bird Box begins with its imagery, and within that, the blindfold. The single promotional images of Bird Box were striking and intriguing – whether it was Sandra Bullock in a river with a child, or in a forest, or a boat – the colors were drained (aka “we’re watching a dystopian movie!”), and everyone was blindfolded (aka “ok, now we’re intrigued!”). 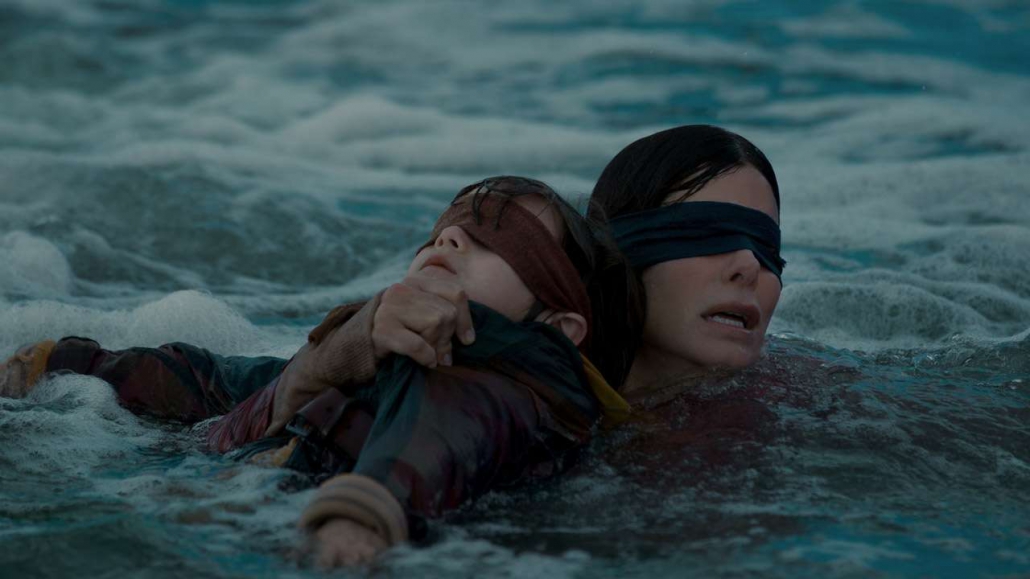 Yes, they plugged these images everywhere – the opening page of Netflix whenever it was launched, billboards, magazines, Times Square – you name it, they advertised there. So Bird Box was not without a huge marketing budget, but then neither was Bright, and that didn’t come close to achieving the success of Bird Box. And so we come back to that image, and the internet takes over…

The Power Of The Meme

Those beautifully striking blindfolded images happened to also be a meme goldmine. Twitter, Facebook, and Instagram blew up with Bird Box memes, and the viral sensation had begun.

“did you see my text”

Seeing memes about a movie or show that you haven’t seen, that also contains intriguing imagery, drove more and more people to stream the movie, and led to more and more memes. Rumors also started flying that Netflix themselves planted many of the memes, something they deny, but whether they did or didn’t, the ability of such a medium to go viral cannot be understated. The sensation even moved over to the world of the “Internet challenge” – the Bird Box Challenge had internet users videoing themselves doing daily tasks, but blindfolded – what could go wrong? After seeing this, including people driving cars blindfolded, Netflix felt compelled to post a warning for fans of the movie not to perform dangerous tasks while doing the challenge, probably more to attempt to cover their backs than to put any halt on the spread of the viral sensation that was taking place before them.

Can’t believe I have to say this, but: PLEASE DO NOT HURT YOURSELVES WITH THIS BIRD BOX CHALLENGE. We don’t know how this started, and we appreciate the love, but Boy and Girl have just one wish for 2019 and it is that you not end up in the hospital due to memes.

While it is tricky to identify the precise reason why Bird Box, an averagely reviewed movie, was such a success for Netflix, it is quite clear that the internet streaming giant’s willingness to embrace all forms of social media, combined with an understanding of the visual strengths of the movie they had under their belt and how to put it in front of every subscriber, and of course a huge advertising budget, all played a part in the movie being seen by a record-breaking number of viewers.

Essential Tips for Surviving the Age of Voice Search

For Your Consideration or: How Netflix is Changing the Game Again
Scroll to top